Hexarelin, on a mcg per mcg basis, is the most potent of the GHRP’s for GH release.

However, Hexarelin administration will quickly lead to desensitization when used at effective

dosages, which makes it less than ideal for long-term use. This limitation has led to a decrease

in popularity among users of GH peptides, with GHRP-2 and Ipamorelin leading the pack in

the area of long-term effectiveness. However, these limitations do not mean Hexarelin is

worthless. On the contrary, Hexarelin can be added to other GHRP’s (such as GHRP-2 &

Ipamorelin) in lower dosages, in order to elicit further elevations in GH without incurring the

desensitization that commonly presents itself when using Hex alone at peak effective dosages.

Hexarelin comes in a freeze dried powder just like the other GHRP peptides and storage should be done in a cool dry place until reconstituted and placed in a refrigerator. Bacteriostatic water is used to reconstitute the powder and an insulin syringe is the preferred method for administering subcutaneous injections of hexarelin. Users will notice 200mcgs is the saturation dose for hexarelin and over a few weeks of use total desensitization may begin to take place. Also, the occasional flare up of the pituitary has been noted when dosing far beyond saturation doses. Desensitization can be cleared easily by taking a break from hexerlin usage for a few days to a few weeks. This GHRP is the strongest, and because of the desensitization factor, I believe the optimal way to use this peptide would be to blend it at low doses with other GHRP’s like GHRP2, GHRP6 or iPamorelin. By combining a low dose of hexearelin with another GHRP, you are going to increase your ability to put out a greater pulse of growth hormone. Combine this with GHRH’s and you have a synergistic blend that will release GH more effectively. In fact, for synthetic HGH users, this may be a viable way to save money on using less exogenous GH by combining it with hexarelin in a GHRP+GHRH cycle. As a result, utilizing hexarelin in this protocol would establish the maximum GH release in the body. 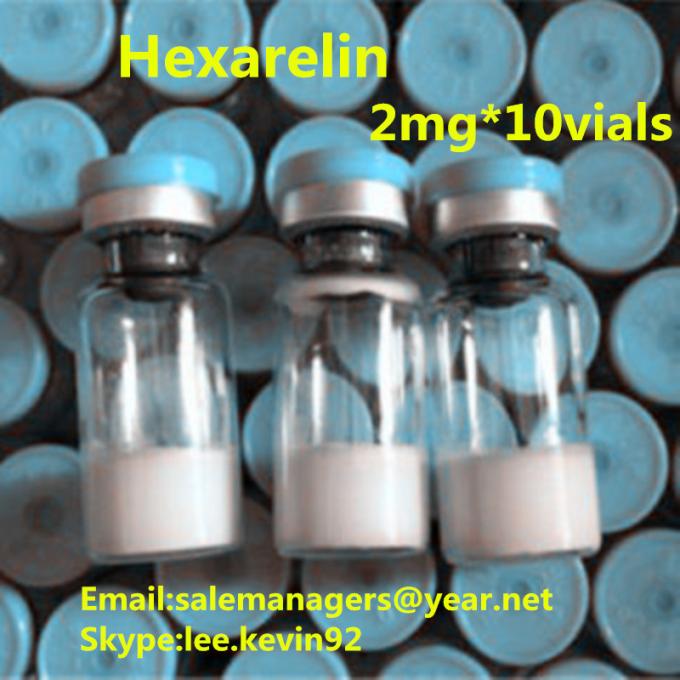