Product Name: Gonadorelin
Sequence: His-Trp-Ser-Tyr-Gly-Leu-Arg-Pro-Gly-NH2
Alias: Gonadorelin Diacetate,Man Diacetate Salt
CAS: 34973-08-5
MF: C55H75N17O13
MW: 1182.29
Purity: 99.6%
Appearance: White Powder
Specification:2mg/vial, 10mg/vial
Storage: Lyophilized peptides although stable at room temperature for 3 months, should be stored desiccated below -18° C. Upon reconstitution of the peptide it should be stored at 4° C between 2-21 days and for future use below -18° C. 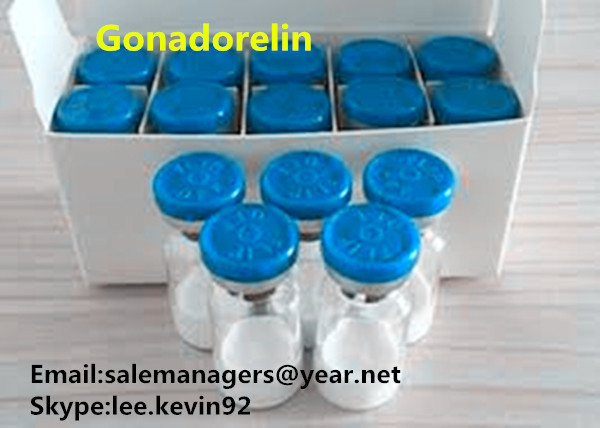 Gonadorelin is a drug that is naturally released from the hypothalamus of gonadotropin-releasing hormone (GnRH). GnRH causes the pituitary to release other hormones (luteinizing hormone [LH] and follicle stimulating hormone [FSH])). LH and FSH control child development and adult fertility.

Gonadorelin is used to test the operation of the hypothalamus and pituitary glands. In the case where the hypothalamus does not release enough GnRH, it can also be ovulated (the eggs are released from the ovaries) because there is no regular ovulation and menstrual period.

Gonadorelin is used to test how well the hypothalamus and the pituitary glands are working. It is also used to cause ovulation (release of an egg from the ovary) in women who do not have regular ovulation and menstrual periods because the hypothalamus gland does not release enough GnRH.

Gonadorelin is responsible for the release of follicle stimulating hormone and leutinizing hormone from the anterior pitutitary. In the pituitary GnRH stimulates synthesis and release of FSH and LH, a process that is controlled by the frequency and amplitude of GnRH pulses, as well as the feedback of androgens and estrogens.

The pulsatility of GnRH secretion has been seen in all vertebrates, and it is necessary to ensure a correct reproductive function. Thus a single hormone, GnRH, controls a complex process of follicular growth, ovulation, and corpus luteum maintenance in the female, and spermatogenesis in the male. Its short half life requires infusion pumps for its clinical use.