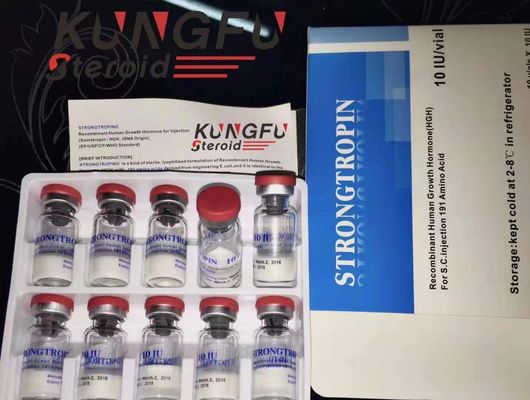 Keep at 2~8ºC away from light. The reconstituted solution mixed with Sterile Water for injection is advised be stored at 2~8ºC for 48 hours, do not be frozen.

STRONGTROPIN® is a kind of sterile, lyophilized formulation of Recombinant Human Growth Hormone (HGH) with 191 amino acids , derived from engineering E.coli, and it is identical to the natural growth hormone in amino acid sequence and three-dimension structure. STRONGTROPIN® is indicated for growth failure due to endogenous growth hormone deficiency (GHD) and Turner disease or Kidney failure. STRONGTROPIN® can be used to heal up the surgery wound or burned wound and it has good effect to preservation for human aging.

It is reported that the equal pharmacological effect could be achieved via subcutaneous (sc) or intramuscular (IM) administration. Even though sc may lead a higher concentration of GH in plasma, IM could also yield the same IGF-l level. The absorption of GH is the relatively slow, Cmax often occurs at 3-5 hours after injection. Clearance of GH is via liver and kidney, the half-life of clearance is about 2-3 hours. Uncatabolized GH excreted in urea is almost immeasurable. All of the GH in circulation system exists as a complex form with GH binding proteins that make the half-life of GH prolonged.

1. STRONGTROPIN® should not be used in patients whose epiphysis had been closed.

2. STRONGTROPIN® should not be used in cancer patients with active neoplasia. GH therapy should be discontinued if evidence of neoplasia develops.

3. STRONGTROPIN® should not be used in patients in acute shock stage with severe infection.

Growth hormone may cause transient hyperglycemia; it can be recovered as the administration proceeded or terminated.
Adverse reactions occurred in about 1% short stature children in clinical trial. Common adverse reactions include slight pain, tingle, turgescence around the injection site and peripheral edema, arthralgias. All of those adverse reactions often occurred at the beginning of treatment, and were temporal and tolerable. Long-term and high dosage administration of rhGH may develop the antibodies in a few patients. However, the antibodies concentration could be rarely up to as high as 2 mg/L that might affect the therapeutic efficiency.

1. rhGH therapy should be conducted on exactly diagnosed GHD patients under advice of experienced doctor.

2. For diabetes patients, dosage of anti-glucourea drugs should be adjusted during rhGH therapy.

3. For patients whose GHD were caused by encephaloma or encephalic wound, the progress and relapse possibility of potential diseases should be closely monitored.

4. For ACTH deficiency patients, dosage of ATCH should be adjusted because the growth improvement effect of rhGH could be inhibited by simultaneous using of ACTH.

5. Thyroid gland function should be tested regularly because clinical hypothyroidism may occur to some patients during rhGH therapy. For those hypothyroid, thyroid supplementation is necessary for ensuring the therapeutic effects of rhGH.

6. Careful consideration should be taken if claudicating occurred during rhGH therapy because the patients who suffered from endocrine system disease (including GHD) have such a tendency that their epiphysis plates of femur are relatively easy to separate.

7. Growth hormone may lead to over insulin state, attention should be paid to if lower glucose intolerance appeared.

It is not recommended for pregnant and nursing women to accept rhGH therapy.

Response to rhGH of children is similar to that of adults in pharmacology, toxicology and pharmacokinetics, rhGH is safe for pediatric use.

Response to rhGH of old patients is similar to that of adults in pharmacology, toxicology and pharmacokinetics, rhGH is safe for geriatric use.

There is yet no report about over dosage of rhGH; however, over dosage may cause some side effect, such as hypoglycemia at the beginning then succeeded with hyperglycemia. Long-term over dosage using of rhGh can lead to acromegaly.

it can be bought through a doctors prescription (high price), or it can be bought on the black market (in which case you have to be extra careful as most of the brands are counterfeit, containing hgh of questionable origin if it's real at all). If buying from a non reputable source, you should always have the HGH lab tested.

it can be in liquid form (very fragile, sensitive to room temperatures and shaking) or it can be in lyophilized - freeze dried powder form (suitable for shipping world wide). Never buy liquid form on the black market because there is no way of knowing how it was handled before you got it.

it can be authentic (contains what it claims), or it can be counterfeit in which case scammers relabel vials of questionable origin and make them look like original, then offer them at "too good to be true" prices to lure in the victims.

Various brands come at differently dosed vials. The dosage/strength per vial can be 4IU, 10IU, 12IU, 40IU which does not really matter as long as the price per IU is right.

Which is the best HGH?

To recap the above differences - growth hormone can be either real or not, high purity or low purity, western or asian priced, liquid or freeze dried and it comes packed in differently dosed vials. The best growth hormone would then obviously be the high purity, 191 amino acid sequence, freeze dried, original and realistically priced one.