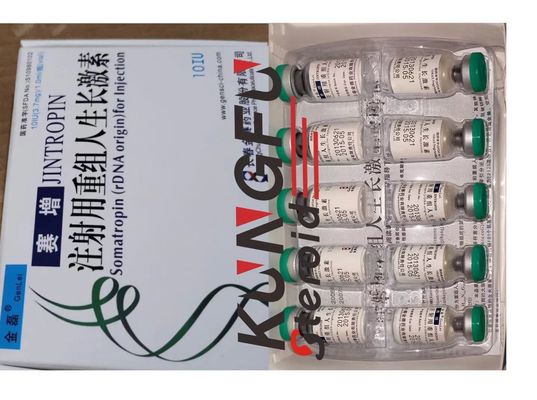 Jintropin is a supplement containing human growth hormone that many athletes take in hopes of enhancing strength, agility and exercise performance. Other people take Jintropin believing it can turn back the clock and forestall the aging process. However, with clinical results mixed and many potential side effects as well as legal considerations, supplements like Jintropin are generally only recommended for a few special medical conditions. Exercise caution if considering using this supplement.

Jintropin is one of the most potent recombinant Human Growth Hormones on the market today. It is a proper 191 amino acid sequence Somatropin (natural to human body) and is produced by GeneScience Pharmaceutical Co, Ltd.

According to IMS, an internationally recognized marketing firm, Jintropin is the absolute market leader in China with just over 75% of market share. It was first introduced in 1997 when it was the first somatropin brand produced in China.

Jintropin is indicated for patients suffering from severe burns, or recovering after major operation. It is given to AIDS patients to prevent muscle wasting. Children with stunted growth, caused by various illnesses will benefit from growth hormone the most.

Recreational use of growth hormone has been on the rise ever since synthetic variant first came on the 2 decades ago. Bodybuilders brought a lot of publicity to JINTROPIN as it was their favourite brand due to the low price, high quality and availability on the black market. In 2007, when actor Sylvester Stallone was caught with Jintropin by Australian customs, the media attention finally brought trouble to the manufacturer Genescience Pharmaceuticals. Chinese government temporarily revoked Gensci’s licence while charges against the CEO of the company, Mr Jin Lei were brought up in court (Providence, United States). Gensci’s operations have since returned to normal, however Jintropin disappeared from the black market to be replaced by its successor Hygetropin. Nowadays majority of Jintropin on the black market is considered to be counterfeit.

Jintropin is created using secretion technology. Genetically modified E.coli bacteria secrete human body’s identical somatropin which is then isolated and freeze dried. This method produces a very stable form of a molecule, which is otherwise too fragile to survive room temperatures or shaking. When freeze dried it remains stable at 37C (98F degrees) for over 30 days or 45C degrees for over a week.

Growth hormone has been studied in various animal and human clinical trials, but MayoClinic.com notes there has been little in the way of results to show that HGH can help otherwise healthy adults regain their youth and vitality. However, HGH does have benefits if you have a true growth hormone deficiency unrelated to aging. This condition is rare, often caused by a pituitary tumor, and HGH helps to increase bone density, muscle mass and exercise capacity while decreasing body fat in these patients. Humane growth hormone is also approved for the treatment of muscle wasting in patients with HIV or AIDS.

A study published in "Neuroscience" in 2004 on HGH in laboratory animals over a period of four months found that the supplement helped improve age-related learning impairment and cognitive decline. Human growth hormone injections have been shown to increase muscle mass and reduce body fat in older adults, and in fact, HGH treatments like Jintropin may show more results in older adults than in younger adults. Adult studies have not been long term, however, so it remains to be seen if the benefits will last or if there are additional benefits, as well as whether the side effects involved will disappear or become even worse.

Side effects of Jintropin

Depending on the dosage and each individual’s response to growth hormone treatment Jintropin produces typical side effects associated with high purity somatropin. These side effects range from requirement to take afternoon “baby” naps, carpal tunnel syndrome, water retention, morning aches and hypoglycemia.