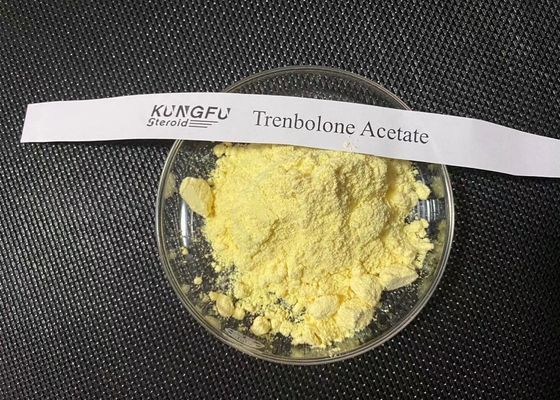 Each vial contains 10 ml of product with a concentration of 100mg/ml Trenbolone Acetate.

Trenbolone Acetate is perhaps the most remarkable among the synthetic injectable anabolic steroids compounds other than testosterone. Of them, it is certainly the most remarkable for mass gain, strength gain, and contest preparation. It should not be used as the sole anabolic in a steroid cycle, mass gains are greatly limited when this is done. Instead, should be stacked with Dianabol, Testosterone, as the most common choices.With a half-life of around 1-2 days, it is relatively much faster form than Trenbolone Enanthate and perfectly suits for fast bulking and cutting cycles.

Trenbolone Acetate is a 19-nortestosterone (19-nor) anabolic androgenic steroid. The 19-nor classification refers to a structural change of the testosterone hormone in that it lacks a carbon atom at the 19th position. This puts Trenbolone Acetate in the same category as Deca Durabolin (Nandrolone Decanoate). In fact, the Trenbolone hormone itself is simply a modified form of the Nandrolone hormone. The Trenbolone hormone carries a double bond at carbons 9 and 11, which in turn slows its metabolism, greatly increases its binding affinity to the androgen receptor, and inhibits it from aromatizing. The resulting change makes Trenbolone one of the most potent anabolic steroids of all time. Simply by looking at its structural ratings, we can begin to see how powerful it is. Trenbolone carries an anabolic rating of 500 and an androgenic rating of 500 is well. Such ratings are based on and measured against the ratings of testosterone, which carries a rating of 100 in both categories. Beyond its basic hormone structure, Trenbolone Acetate has the small/short Acetate (acetic acid) ester attached to it. The ester is attached in order to control the hormone’s release time post injection. By carrying the Acetate ester, this gives Trenbolone an active half-life of approximately two days. Some data shows its active half-life to be a little less than three days, so forty-eight to slightly less than seventy-two hours would appear to be a good range. This, obviously, makes Trenbolone Acetate a fairly fast acting steroid and will require injections to take place somewhat frequently in order to maintain stable blood levels. Trenbolone Acetate carries several powerful traits that are commonly associated with numerous anabolic steroids. However, while it carries numerous common traits, it also carries them at a rate of power and efficiency far above and beyond most steroids. Trenbolone Acetate also carries one trait that largely separates it from the rest of the pack and is what’s largely responsible for making it such a valuable hormonal compound. Like numerous anabolic steroids, Trenbolone Acetate will greatly enhance protein synthesis and nitrogen retention in the muscle tissue. Protein synthesis refers to the rate by which cells build proteins; protein represents the primary building block of muscle. This will promote enhanced anabolism, as well as provide a strong protectant atmosphere during a caloric deficit. It will also largely promote a far greater level of recovery. As for nitrogen retention, the more nitrogen we retain the more anabolic we remain. Conversely, when nitrogen levels fall, this can lead to a catabolic or muscle wasting state. This is due to all lean muscle tissue being comprised of approximately sixteen percent nitrogen. While this is not a large amount, it is enough to make a very big difference. Once again, with enhanced nitrogen retention the anabolic atmosphere is greatly enhanced, tissue is preserved, and recovery is promoted. Like many anabolic steroids, Trenbolone Acetate has the ability to greatly promote Insulin-Like Growth Factor-1 (IGF-1). IGF-1 is a powerful, naturally produced protein based hormone that is extremely anabolic, highly important to recovery and rejuvenation, and affects nearly every cell in the human body. IGF-1 plays a role on muscle tissue, ligaments and tendons, cartilage, the central nervous system, and the pulmonary system. There are very few anabolic steroids that will promote IGF-1 like Trenbolone Acetate. Trenbolone Acetate also has the ability to greatly increase red blood cell count. Red blood cells are responsible for carrying oxygen to and through the blood. With an enhanced amount, this increases blood oxygenation. This will tremendously enhance muscular endurance and will once again greatly promote an enhanced rate of recovery. While Tren carries this trait, we cannot say it carries it in a manner that is above and beyond other anabolic steroids. Another common steroidal trait held by Trenbolone Acetate is its ability to inhibit glucocorticoid hormones. Glucocorticoid hormones, sometimes referred to as stress hormones, are in many ways the opposite of anabolic steroidal hormones as they destroy muscle tissue and promote fat gain. They are, however, essential to our wellbeing, to a degree, but the use of Trenbolone Acetate will ensure such hormones do not become dominant in the body. This will be useful during any phase of supplementation, but perhaps more so during a hard diet when glucocorticoids like cortisol often become dominant. Trenbolone Acetate’s strong binding affinity to the androgen receptor will also be another trait that is very useful when dieting. Like most anabolic steroids, the use of Trenbolone Acetate will promote a more powerful metabolism; however, strong binding to the androgen receptor has been linked to direct lipolysis. This will be extremely valuable during a diet, but can also be tremendously beneficial during an off-season period of growth by helping the individual maintain a lower level of body fat. The final trait of Trenbolone Acetate is its ability to improve feed efficiency or what is sometimes referred to as nutrient efficiency. This is the precise reason why the hormonal compound is given to cattle. Food is the most important part of any plan, and the most anabolic substance we can consume. However, the body will only utilize each nutrient to a certain degree. The food in question will determine the rate of utilization. However, by including Trenbolone Acetate into a program, each nutrient consumed becomes more valuable, and the body is now able to utilize each nutrient to a higher degree. While the total intake of nutrients may not have changed, the body will be able to make better use of the same amount. The best way to look at it is like the money in your pocket. With one dollar you are able to buy one dollars worth of goods and services. Now imagine if you could take that same dollar and purchase ten dollars worth of goods and services. While perhaps a slight oversimplification, when it comes to the value of the nutrients you consume, this is essentially what Trenbolone Acetate will do.