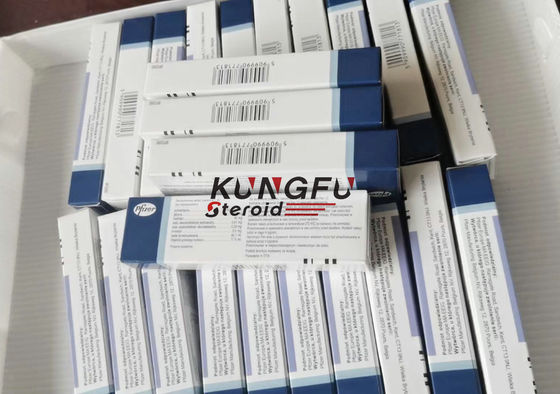 What GENOTROPIN is used for

GENOTROPIN is a growth hormone.

GENOTROPIN is used to treat:

Short stature caused by the lack of growth hormone.

GENOTROPIN promotes the growth of the long bones (for example, upper legs) in children with reduced height due to lower than normal levels of growth hormone.

Turner syndrome is a genetic disorder found in females. The condition may cause short stature and ovaries to not fully develop.

Prader-Willi syndrome is a genetic disorder that may cause short stature, low muscle tone and a constant feeling of hunger.

Diet restrictions may still be necessary during treatment with GENOTROPIN.

Children with kidney disease, to help them grow at a normal rate.

Adults who do not produce enough natural growth hormone.

Genotropin pen Pfizer 12mg (36iu) – Somatropin is a potent metabolic hormone of importance for the metabolism of lipids, carbohydrates and proteins. In children with inadequate endogenous growth hormone and in

children with Prader-Willi syndrome, somatropin stimulates linear growth and increases growth rate. In adults, as well as in children, somatropin maintains a normal body composition by increasing nitrogen retention and stimulation of skeletal muscle growth, and by mobilisation of body fat. Visceral adipose tissue is particularly responsive to somatropin. In addition to enhanced lipolysis, somatropin decreases the uptake of triglycerides into body fat stores. Serum concentrations of IGF-I (Insulin-like Growth Factor-I), and IGFBP3 (Insulin-like Growth Factor Binding Protein 3) are increased by somatropin. In addition, the following actions have been demonstrated:

– Lipid metabolism: Somatropin induces hepatic LDL cholesterol receptors, and affects the profile of serum lipids and lipoproteins. In general, administration of somatropin to growth hormone deficient patients results in reductions in serum LDL and apolipoprotein B. A reduction in serum total cholesterol may also be observed.

– Water and mineral metabolism: Growth hormone deficiency is associated with decreased plasma and extracellular volumes. Both are rapidly increased after treatment with somatropin. Somatropin induces the retention of sodium, potassium and phosphorus.

– Bone metabolism: Somatropin stimulates the turnover of skeletal bone. Long-term administration of somatropin to growth hormone deficient patients with osteopenia results in an increase in bone mineral content and density at weight-bearing sites.

– Physical capacity: Muscle strength and physical exercise capacity are improved after longterm treatment with somatropin. Somatropin also increases cardiac output, but the mechanism has yet to be clarified. A decrease in peripheral vascular resistance may contribute to this effect.

The bioavailability of subcutaneously administered GENOTROPIN is approximately 80% in both healthy subjects and growth hormone deficient patients. A subcutaneous dose of 0.035 mg/kg of GENOTROPIN results in plasma Cmax and tmax values in the range of 13-35 ng/ml and 3-6 hours respectively.

The absolute bioavailability of GENOTROPIN seems to be similar in males and females following s.c. administration. Information about the pharmacokinetics of GENOTROPIN in geriatric and paediatric populations, in different races and in patients with renal, hepatic or cardiac insufficiency is

either lacking or incomplete.

Before you use GENOTROPIN

When you must not use GENOTROPIN (discuss with your doctor)

Your doctor will not prescribe GENOTROPIN if you:

are a child and have closed epiphyses (this means that your bones have finished growing).

have an active tumour or evidence of cancer growth.

are currently being treated for cancer.

have a serious injury or illness, or surgical procedures, requiring intensive care.

have Prader-Willi syndrome and are severely overweight or have marked difficulty breathing.