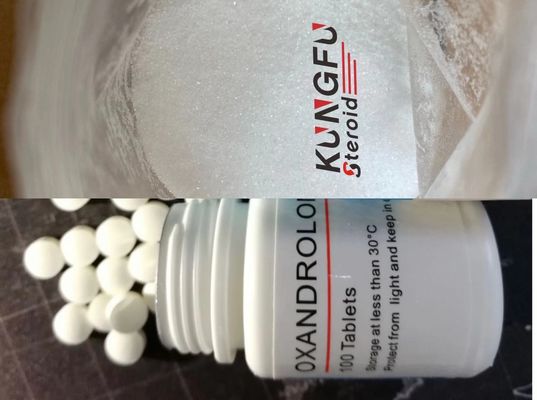 Oxandrolone is a synthetic anabolic-androgenic steroid. It is a 17 alpha-methylated version of dihydrotestosterone (DHT). It can be used for the treatment of many kinds of disorders such as idiopathic short stature, body mass loss due to catabolic illness, severe burns, trauma and hereditary angioedema as well as turner syndrome. Oxandrolone is especially effective in the treatment of severe burns without causing obvious side effects. It acts as an agonist of the androgen receptor, which modulates related gene expression to increase protein synthesis, further boosting muscle growth and increasing body mass as well as bone mineral density. However, it should be noted that its androgenic effect is less than its anabolic effect.

Anavar (oxandrolone), unlike most oral compounds is categorized as a Class I anabolic steroid, most efficiently stacked with Class II compounds such as Dianabol or Anadrol.

It adds little if anything to high-dose use of Class I anabolic steroids such as trenbolone, or to high-dosetestosterone, which is classified as having mixed activity. It can be an aid, albeit an expensive one, to moderate dose testosterone usage.

Anavar has often been called a weak steroid. Part of the reason for this is that use of a Class I steroid alone never is maximally effective. The other cause is that bodybuilders and authors in the field sometimes make unfortunate and unreasonable comparisons when judginganabolic steroids. If say 8 tablets per day does little, then a drug is pronounced useless or weak. And traditionally, oxandrolone was available in 2.5 mg Anavar tablets, proving only 20 mg daily with such usage, which totals to only 140 mg/week. For comparison, testosterone at that dose also gives little results. Indeed, few anabolic steroids give dramatic results at that dose, but they are not called weak on that account. The proper conclusion is that such Anavar tablets were individually weak, but not that the drug lacks potency.

As higher-dose Anavar tablets have become available, the oxandrolone’s reputation has improved. However, it still is not a particularly cost-effective Class I steroid, and if used alone cannot match the performance of a good stack.

Pharmacologically, it has been found that oxandrolone binds weakly to the androgen receptor. This seems inconsistent with the Class I / Class II system, but it is what has been found. Perhaps it is the case that what occurs in the body is not the same as occurs in in vitro study, or perhaps there is another interesting phenomenon occurring.

From the practical standpoint, however, oxandrolone’s stacking behavior requires that it be classified as a Class I steroid: it combines synergistically with those categorized as Class II, but only additively with Class I compounds. From the practical standpoint, it is a rather potent drug – that is to say, it has good effectiveness per milligram. Stacked with a Class II steroid, Anavar is quite effective at only 75 mg/day, or even 50.

Among bodybuilders Anavar is most commonly used during cutting phases of training when water retention is a concern. The standard dosage for men is in the range of 20-50mg per day, a level that should produce noticeable results.

Oxandrolone can be further combined with anabolics like Primobolan and Winstrol to elicit a harder, more defined look without added water retention. Such combinations are very popular and can dramatically enhance the showphysique. One can also add strong non-aromatizing androgens like Halotestin, Proviron or trenbolone.

Most men who plan proper Anavar dosages for their cutting cycles will find they have picked the best time to supplement with this hormone. For this purpose most men will need 50mg per day, with 80mg per day, although very expensive far more effective. Some men will find Anavar dosages of a 30mg per day range to be all they really want and while this will give them a boost it will be mild; very mild, as the Oxandrolone hormone is a very mild steroid to begin with. Regardless of your total Anavar dosages most men will find this steroid to be most effective at the tail-end of a cutting cycle, generally 6-8 weeks of total Oxandrolone use will suffice.

Trenbolone or Primobolan are suitable substitutes for Anavar, without the liver toxicity issues. As a substitute,Primobolan shares the property of being low-suppressive, while trenbolone does not.

An interesting application of the drug that takes advantage of its oral administration is use as a morning-only bridging agent between cycles, which in my opinion should be done – if done – only after fully recovering normal testosterone production from the last cycle. At least 20 mg is usually acceptable in this application. Ideally, testosterone levels will be measured to monitor such bridging. A factor limiting to such bridging is the liver toxicity issue.

Among bodybuilders it is most commonly used during cutting phases of training when water retention is a concern. The standard dosage for men is in the range of 20-50mg per day, a level that should produce noticeable results.

It can be further combined with anabolics like Primobolan and Winstrol to elicit a harder, more defined look without added water retention. Such combinations are very popular and can dramatically enhance the show physique. One can also add strong non-aromatizing androgens like Halotestin, Proviron or trenbolone.