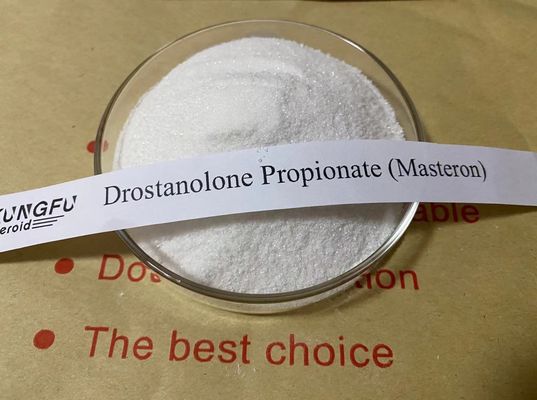 Packing: foil bag or as required.

Where one does not wish to use a large amount of injectable and wishes to use either no trenbolone or only a modest amount of that drug, Masteron is often an ideal choice for inclusion in a steroid stack, or in some cases for use as the sole injectable for a steroid cycle.

Drostanolone Propionate is an anabolic androgenic steroid that first hit the market around 1970 under the trade name Masteronmanufactured by Syntex. However, the compound was actually developed by Syntex in 1959 along with Oxymetholone (Anadrol) but would not be released until well after Anadrol.

DrostanolonePropionate would also provide the compound under numerous other brand names such as Masteril and Metormon among others, as well as Drolban under the license given by Syntext to Lilly. However, Masteron has remained the most recognizable brand.

As a propionate ester, Masteron has a half-life of probably two days and therefore is preferably injected at least every other day, and more preferably daily. An enanthate ester version having a half-life of probably 5 days has become available. The traditional (propionate) form of Masteron is also advantageous for brief cycles or for use at the end of a longer cycle, giving quick transition from high, anabolically-effective blood levels to levels sufficiently low to allow recovery of natural testosterone production.

Masteron Drostanolone Propionate or Masteron is probably one of the most interesting steroids used by athletes. It is primarily for the treatment of breast cancer patients to inhibit estrogen production. Estrogen is the hormone secreted by female that gives them their distinct sexual characteristics. Masteron had become a favorite steroid among athletes and competitive bodybuilders. It is a pretty popular anabolic steroid.

Drostanolone propionate is used primarily by athletes who need to retain strength while losing mass. It is beneficial to runners and athletes who must remain in a certain weight class.

It has gained popularity in the bodybuilding community as a diuretic and muscle defining drug. Individuals interested in using the drostanolone propionate are those that are looking to add muscle hardness and density to their physiques, nearly always for the purpose of bodybuilding competitions.

Drostanolone propionate can increase muscle hardness and density, giving an individual a more complete appearance when competing on stage.However, an already rather low body-fat level is needed for it to take full effect.

Drostanolone propionate can promote increased strength while keeping body fat the same or even lowering it, something can help to prevent muscle loss while dieting.

This can also allow strength athletes or those athletes in sports which have weight classes to increase performance without the risk of being raised into a higher weight class or add mass that may hinder performance.

Masteron can be pretty much incorporated into any cycle containing testosterone (see Testosterone as an Anabolic Steroid). The dosages that should be used with Masteron are:

Masteron can be used as the sole injectable.A Masteron/Dianabol stack is more effective. however, as is a Masteron/Anadrol stack. Testosteron also combines well with Masteron. Another use of Masteron which has become more common lately is combination with trenbolon.

Unlike combination with Dianabol or Anadrol, there is only an additive effect, not a synergistic effect. However, including Masteron allows a lower trenbolon dosage while achieving very similar or equal physique benefit with less potential for trenbolon-specific side effects of night-sweats, increased tendency to aggression, and/or insomnia.

Masteron also is useful in combination with testosteron for self-prescribed hormone-replacement therapy (HRT.) For example, 100 mg/week each of Masteron and testosteron can be superior for physique benefits to 200 mg/week testosteron alone, while being milder in side effects due to lower resulting levels of estradiol (estrogen) and DHT.