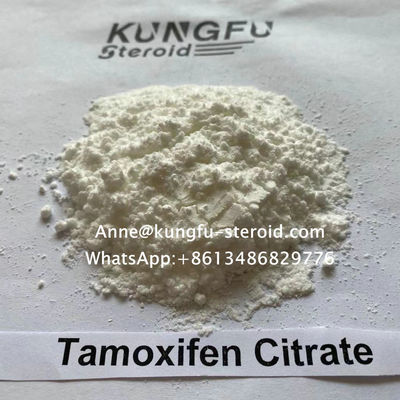 1. This product is most often referred to as "Nolvadex" by bodybuilders. Nolvadex is not a steroid, rather a selective estrogen blocker. While Nolvadex doesn't prevent the buildup of estrogen in the body, it does prevent it from acting on certain receptors, most notably, those located in the nipples. This has obvious benefits to bodybuilders, because this is the area in which "gyno" occurs during the use of aromatizing steroids such as testosterones.

2. Nolvadex (tamoxifen citrate) is very comparable to Clomid, behaves in the same manner in all tissues, and is a mixed estrogen agonist/antagonist of the same type as Clomid. The two molecules are also very similar in structure. It is not correct that Nolvadex reduces levels of estrogen: rather, it blocks estrogen from estrogen receptors and, in those tissues where it is an antagonist, causes the receptor to do nothing.

The belief that it reduces gains seems to stem from the fact that the scientific literature reports a slight reduction in IGF-1 (individuals using anabolic steroids were not studied though) from use of Nolvadex.

Thus, Dan Duchaine reported that it reduces IGF-1 and therefore reduces gains. However, if this effect exists at all, it must be very minor, due to the excellent gains that many have made, and from the fact that no one has noticed any such thing from Clomid, which has the same activity profile.

The fact that Nolvadex will reduce water retention may result in the user agreeing that gains are less, since weight gain is less, thus reinforcing the bias.

The oral absorption of TCT is slow and plasma concentrations get peaked within 3 to 6 hours. After absorbed in the liver, Tamoxifen citrate is metabolized into N-demethyl tamoxifen whose activity is similar to Tamoxifen citrate. Tamoxifen citrate has a half-life of 5 ~ 7 days, its metabolite N- demethylation has 7 ~ 14 days.