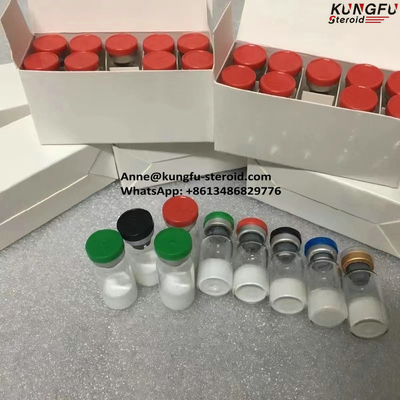 Delta sleep-inducing peptide, abbreviated DSIP, is a neuropeptide that when infused into the mesodiencephalic ventricle of recipient rabbits induces spindle and delta EEG activity and reduced motor activities.

A modulation or 'programming' interaction of delta sleep-inducing peptide (DSIP) with endogenous opioid-peptidergic systems and exogenous intracerebrally or systemically administered morphine and amphetamine. The induction of cerebral MAO-A activity, a pronounced influence on the circadian rhythms of locomotion and intracerebral neurotransmitter as well as plasma protein and cortisol concentrations has been reported. DSIP was also shown to counteract experimentally induced stress situations in animals.

An improvement of the psychomotor performance and the concentration capacity in humans beside sleep normalization and pronounced effects on withdrawal symptoms including pain states in alcoholics and opiate addicts was discovered. This encouraged a pilot study for a possible action of the peptide in humans suffering from chronic pronounced pain episodes. DSIP has stress-protective, antiseizure, and immunomodulating effects.

DSIP is an amphiphilic peptide of molecular weight 850 daltons with the amino acid motif:N-Trp-Ala-Gly-Gly-Asp-Ala-Ser-Gly-Glu-C

It has been found in both free and bound forms in the hypothalamus, limbic system and pituitary as well as various peripheral organs, tissues and body fluids.[5] In the pituitary it co-localises with many peptide and non-peptide mediators such as corticotropin-like intermediate peptide (CLIP), adrenocorticotrophic hormone (ACTH), melanocyte-stimulating hormone (MSH), thyroid-stimulating hormone (TSH) and melanin concentrating hormone (MCH). It is abundant in the gut secretory cells and in the pancreas where it co-localises with glucagon.

In vitro it has been found to have a low molecular stability with a half life of only 15 minutes due to the action of a specific aminopeptidase-like enzyme.It has been suggested that in the body it complexes with carrier proteins to prevent degradation, or exists as a component of a large precursor molecule,but as yet no structure or gene has been found for this precursor.

Evidence supports the current belief that it is regulated by glucocorticoids.

Gimble et al. suggest that DSIP interacts with components of the MAPK cascade and is homologous to glucocorticoid-induced leucine zipper (GILZ).GILZ can be induced by Dexamethasone. It prevents Raf-1 activation, which inhibits phosphorylation and activation of ERK.