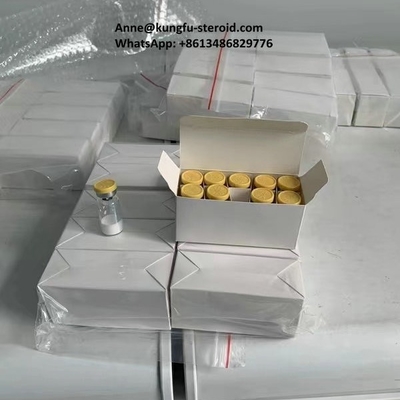 TB-500 is primarily used in the treatment of various muscle injuries or pain caused by inflammation. There is very little official human data available for this product; however, it has been a long time used in racehorses. TB500, although synthetic, serves to act as a synthetic form (loosely) of Thymosin Beta4 (TB4). TB500 is not TB4; although very commonly confused as TB4, it is designed to provide the benefits of the naturally occurring thymus produced hormone.

The thymus gland as well as in various localized cells in the human body produces thymosin Beta-4 (TB-4). TB-4 is found in cytoplasm in high levels of concentration as well as in wound fluid. TB-500 is designed to promote the actionable area - the part of TBthat promotes healing. More importantly, manufacturing TB500, despite not being TB4 is possible while the latter is extremely difficult.

Dosage depends on the purpose and severity of the injury / damage you are treating. People generally use between 4 to 8 mg of TB500 per week during the initial (loading) period of 4 to 6 weeks. Afterwards some opt to maintain the effects with a low 2 to 6 mg dose once every 2 weeks. The effects of TB-500 wear off within 2 - 3 weeks of injection.

2. TB-500 maintainance phase:
duration: as long as needed
dosage: between 2 - 6 mg of TB-500 per 2 weeks
frequency of injection:2 mg per injection, between 2 - 3 times per 2 weeks (depending on the total bi-weekly dosage)

Effects of TB-500 are dosage dependent and usually become noticeable within days. For some people it takes up to 4 weeks. Individuals may respond to the therapy differently, however some effects are generally observed by most people.

The body of knowledge is as yet limited with regard to TB-500 dosage. The above protocol may or may not be the most efficient, but it is the protocol with the most track record. It’s entirely possible that as knowledge is gained, method of use will change. A reasonable possibility, for example, is to increase dosing frequency to 3x/week (which I have done personally to good effect), or to increase dosing to 4 or 5 mg twice per week. Before going to such a program, however, I recommend trying the standard protocol first.