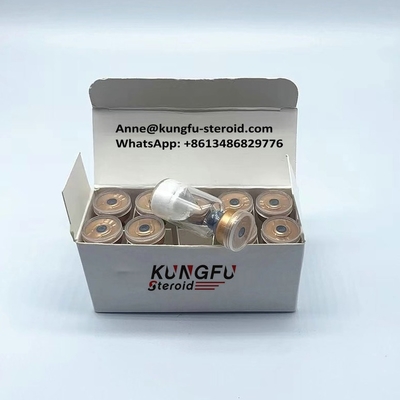 MT-1 (or Melanotan I, or Afamelanotide, or CUV-1647) is a synthetic analog of peptides nature of endogenous
melanocortine peptide alpha-melanocyte stimulating hormone.
It has hormones nature as well as common proteins features.

Melanotan 1 (also referred to as Afamelanotide) is a synthetic peptide variant of a peptide hormone, called alpha-Melanocyte stimulating hormone or MSH that is naturally produced in the body and is responsible for stimulating melanogenesis, a peptide process for pigmentation of the skin. Alpha-MSH activates certain melanocortin receptors in the process of exerting its effects. Indeed, MSH also exerts potent influence over lipid metabolism, appetite, and sexual libido via these melanocortin receptors. As a result, Melanotan-1 sunless skin tanning effects. While Melanotan 2 and PT-141 have been studied at length as a potential remedies for the treatment of sexual dysfunction, Melanotan-1 has been researched extensively for use in protecting against the harmful effects of ultraviolet radiation from sunlight due to its melanogenesis-stimulating properties.

The Development of Melanotan 1:

The initial creation of the Melanotan 1 peptide tanning analogue can be credited to the University of Arizona. During the course of study aimed at developing a defense against skin cancer, focus was placed on developing a method of stimulating natural melanogenesis, or the natural production of melanin in the skin, without direct exposure to the potentially harmful ultraviolet radiation in sunlight. Initially, University of Arizona researchers attempted to directly administer the naturally occurring hormone alpha-MSH in order to elicit this desired result. Although this strategy exhibited promising results, it was determined that the naturally occurring MSH had a prohibitively short half-life to be of realistic use as a therapeutic remedy. However, the positive results gleaned from MSH administration encouraged further research into the development of Melanotan 1, which exhibits similar effects whilst possessing an extended half-life for functional therapeutic utilization. The researchers, headed by Victor J. Hruby and Mac E. Hadley, found a peptide, [Nle4, D-Phe7]-α-MSH, that was approximately 1,000 times more potent than natural α-MSH. They named this new peptide molecule "Melanotan" (later Melanotan-1).

Melanotan produces its photoprotective effects by triggering a 'signaling cascade' via its activation of the MC1R on melanin-producing cells known as melanocytes. Upon Melanotan binding with the MC1R on the surface of melanocytes in the epidermal layer of the skin, it begins a series of actions and reactions that result in melanocytes favoring the production of eumelanin (photoprotective black/brown pigment). The initial binding activates the MC1R leading to the activation of adenylate cyclase (AC) and stimulation of the production of cyclic adenosine monophosphate (cAMP). cAMP in turn activates protein kinase A (PKA) resulting in the phosphorylation of the cAMP response element-binding (CREB). Phosphorylated CREB will bind to the cAMP response element (CRE) on the microphthalmia-associated transcription factor (MITF) gene leading to the synthesis of the MITF protein. MITF has the ability to activate several genes by binding to them, including the MC1R gene and the genes involved in melanogenesis. This results in increased concentrations of the melanogenic enzymes within the melanocyte.