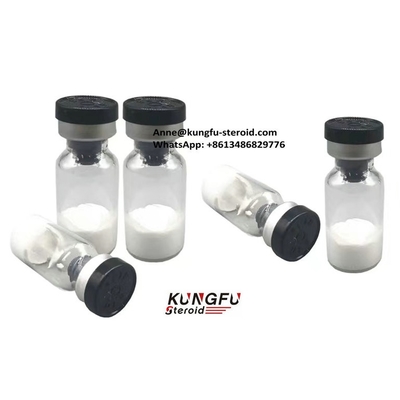 DES IGF-1 is the shorter version of the IGF-1 chain. It is five (5) times more powerful than IGF-LR3 and ten (10) times more powerful than regular base IGF-1. The half-life for DES is about 20-30 minutes, which means this is a very delicate chain. Therefore, administration should only be done at the site where you want to see muscle growth. DES has the ability to stimulate muscle hyperplasia better than LR3. In simple terms, it's best used for site injections, rather than overall growth.

In addition, DES is known to bind to receptors that have been deformed by lactic acid, which is often present during workouts. This allows the DES to attach itself to a mutated receptor and signal tissue growth during training. DES can be used longer and more frequently than LR3.

Insulin Like Growth Factor (IGF)-1 (4-70), otherwise known as IGF-1 DES, produced in E. coli, is a single, non-glycosylated, polypeptide chain containing 67 amino acids and having a molecular mass of 7,372 Da. In vitro studies demonstrate that at equal doses DES (1-3) IGF is ten times more potent than IGF-1 at stimulating hypertrophy and proliferation in cultured cells. It is likely generated through post-translational modification in the sequence of circulating mature IGF-1 via protease action.

IGF-1 DES is a cleaved form of IGF-1 and contains amino acids 4-70. This structure has allowed the effects of the IGF-1 protein to be amplified in the more stable form of the DES 1,3 molecule peptide protein fragment of Insulin-like growth factor 1. The IGF-1 DES, or insulin-like growth factor DES, comes from the IGF-1 family of peptides that play important roles in mammalian growth and development. IGF1 mediates many of the growth-promoting effects of growth hormone and IGF-1 DES, although shorter, pacts an equal amount of physiological altering protein physical changes. Early studies showed that growth hormone did not directly stimulate the incorporation of sulfate into cartilage, but rather acted through a serum factor, termed 'sulfation factor,' which later became known as 'somatomedin' or IGF-1 and more recently through truncation, DES IGF-1.

DES IGF-1 can be dosed at 50-150mcg multiple times a day (prior to training) into specific target areas. since DES has such a short half life (20-30 minutes), desensitization was not noticed at all . Injection sites should be localized; preferably, at the muscle group you want to grow. In simple terms, if you want to grow your biceps, inject IGF-1 DES right into your bicep.

Why IGF-1 and not GH? Growth hormone actually is a precursor to IGF-1. Growth hormone does not directly cause muscle growth, but indirectly causes muscle growth by signaling the release of IGF-1. Human Growth Hormone (HGH) can be very expensive, and to see muscle growth it needs to be paired with insulin or other anabolic steroids. This makes IGF-1 variants like LR3 and DES, which can be used as a standalone drug, a much more viable option for bodybuilder looking to see solid recovery of damaged tissue and muscle growth.

Genuine Receptor Grade LR3 IGF-I is a high quality research reagent for use in studies on cell growth, IGF receptors and IGF binding proteins and is more potent than rH IGF-1 and Media Grade IGF-1 LR3 both in vivo and in vitro due to the drastic increase in biological activity (stronger affinity for binding with the IGF receptor) and high-level purity. This combination of increased biological activity and purity is what sets Receptor Grade IGF-1 LR3 apart from standard IGF-1. Media grade LR3 IGF-I is more commonly used in commercial cell culture vs mammalian. It can also be used as a research reagent at an economical cost to enable studies where biological potency is of less value and higher quantities are required. To maximize results in an animal-based cell study or production Receptor Grade IGF-1 Long R3 should be used exclusively.