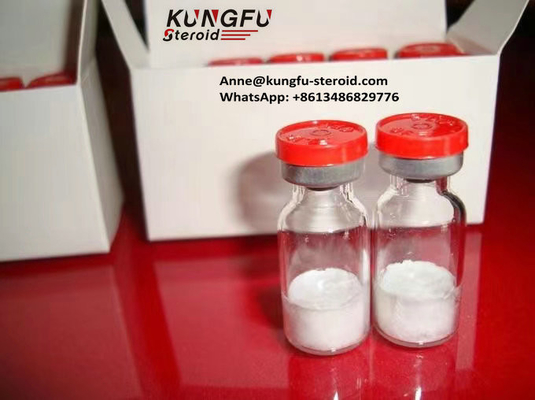 CJC-1295 is an injectable peptide used to increase GH production. This peptide is a growth hormone releasing hormone (GHRH) mimetic, or analog. That is to say, it works in the same way as GHRH, and may be referred to as being a GHRH.

CJC 1295 is typically provided in vials containing 2 or 5 mg of lyophylized powder, though the amount can vary. The contents should be reconstituted by adding a convenient amount of sterile or bacteriostatic water. If for example 2 mL is chosen and the dosing of the vial is 2 mg, the resulting solution then has a concentration of 1 mg/mL, or 1000 mcg/mL.
At time of dosing, an insulin syringe is used to draw and then inject the desired amount. In the above example, a 1000 mcg dose would require a volume of 1 mL, or “100 IU” as marked on an insulin syringe.

Injection may be subcutaneous, intramuscular, or intravenous according to personal preference. If desired, peptide solutions from other vials, such as a vial of a GHRP product, may also be drawn into the same syringe, if there is room. This reduces the total number of injections required.

When recommending CJC 1295, I ordinarily recommend a dosage of 1000 mcg at a time, twice per week.

CJC-1295 markedly increases plasma growth hormone (GH) and insulin-like growth factor 1 (IGF-1) levels in both animals and humans. With a single injection, in human subjects, CJC-1295 increases plasma GH levels by 2- to 10-fold for 6 days or longer and plasma IGF-1 levels by 1.5- to 3-fold for 9 to 11 days. The drug has an estimated half-life of about 6 to 8 days in humans.[3] With multiple doses of CJC-1295, IGF-1 levels were found to remain elevated in humans for up to 28 days.

CJC-1295 has been shown to extend the half-life and bioavailability of growth-hormone-releasing hormone 1-29 and stimulate insulin-like growth factor 1 secretion. It increases the half-life of acting agents by bioconjugation.